ALERT CENTER: Biden marks year since attack: 'I will stand in this breach'

By: Associated Press
WASHINGTON (AP) — President Joe Biden on Thursday delivered what he declared was the “God's truth” marking the first anniversary of the U.S. Capitol insurrection, the violent attack by Donald Trump's supporters that has fundamentally changed Congress and raised global concerns about the future of American democracy.
Biden's criticism was particularly blistering of then-President Trump and his violent supporters.
“For the first time in our history, a president not just lost an election, he tried to prevent the peaceful transfer of power as a violent mob breached the Capitol,” Biden said. “But they failed.”
“I will stand in this breach,” he declared, his voice rising.
“Democracy was attacked,” Biden said at the Capitol. “We the people endure. We the people prevailed.” 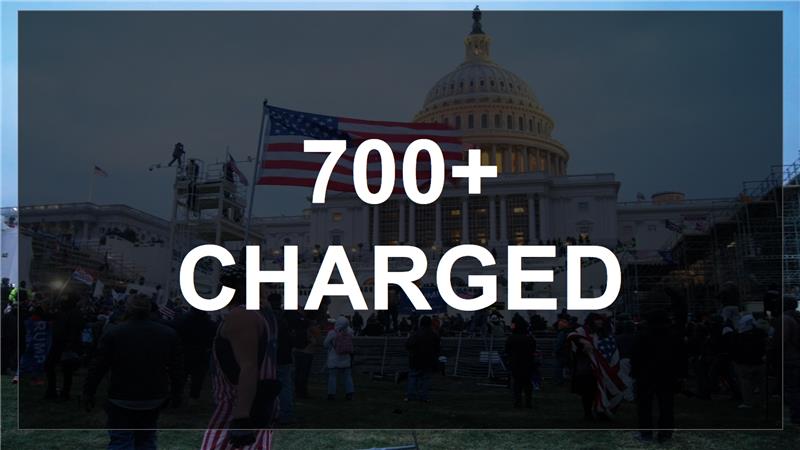 The president and congressional Democrats started the day in Statuary Hall, one of several spots where rioters swarmed a year ago and interrupted the electoral count. Biden drew a contrast between the truth of what happened and the false narratives that have sprung up about the Capitol assault, including the continued refusal by many Republicans to affirm that Biden won the 2020 election.
“You and I and the whole world saw with our own eyes,” Biden said.
He asked those listening to close their eyes and recall what they saw that day, as he described the harrowing, violent scene, the mob attacking police, threatening the House speaker, erecting gallows threatening to hang the vice president — all while then-President Trump sat at the White House watching it on TV.
“Here is the God’s truth about Jan. 6, 2021,” Biden said. ”They were looking to subvert the Constitution."
“We must be absolutely clear about what is true and what is a lie. Here's the truth,” he said. "The former president of the United States of America has spread a web of lies about the 2020 election." 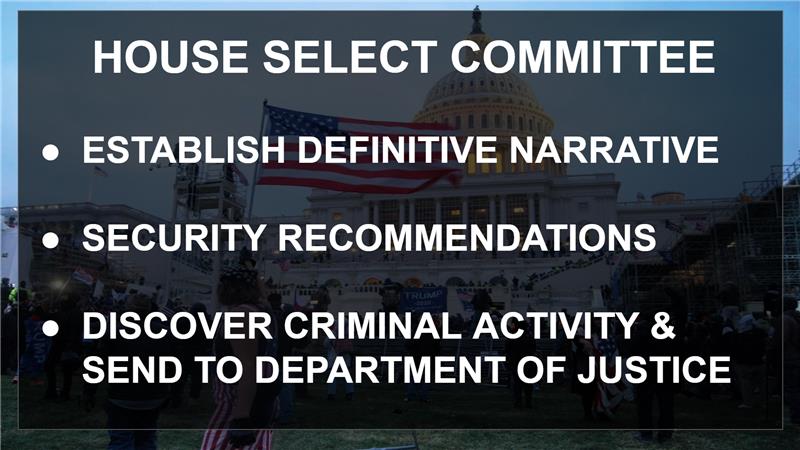 A series of remembrance events during the day will be widely attended by Democrats, in person and virtually, but almost every Republican on Capitol Hill will be absent. The division is a stark reminder of the rupture between the two parties, worsening since hundreds of Trump’s supporters violently pushed past police, used their fists and flagpoles to break through the windows of the Capitol and interrupted the certification of Biden’s victory.
While congressional Republicans almost universally condemned the attack in the days afterward, most have stayed loyal to the former president.
Rep. Liz Cheney, chair of the House committee investigating the attack and one of the few GOP lawmakers attending the Capitol ceremonies, warned that “the threat continues.” Trump, she said, "continues to make the same claims that he knows caused violence on January 6.”
“Unfortunately, too many in my own party are embracing the former president, are looking the other way or minimizing the danger,” she told NBC's “Today.” “That’s how democracies die. We simply cannot let that happen.”
Others, including Senate Republican leader Mitch McConnell, were absent, with a contingent of colleagues attending the funeral for former Sen. Johnny Isakson in Georgia.
In a bid to inform the public, Democrats investigating the insurrection plan to spend the coming months telling the American people exactly what happened last Jan. 6. But leaders will spend the anniversary appealing to broader patriotic instincts.
During the 2020 campaign, Biden said his impetus for running for the White House was to fight for the “soul of the nation” after watching Trump’s comments that some good people were among the white supremacists who marched in Charlottesville, Virginia, in 2017. He warned that American democracy was at stake, and his view is that the Jan. 6 attack was a vivid demonstration of his fears. 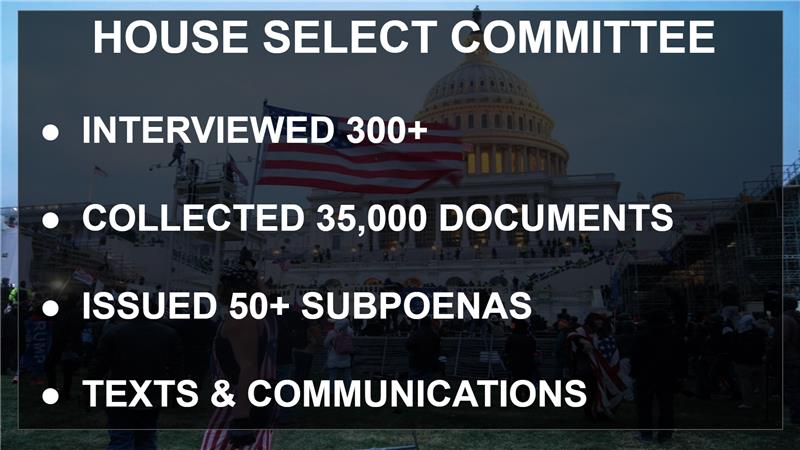 Biden has come under criticism from some in his party for not forcibly explaining to Americans the ways democracy is at risk, or pushing Congress hard enough to pass election and voting rights legislation that is stalled by a filibuster in the Senate. The president has suggested democracy can be bolstered by showing Americans government can work. But critics say that is not enough.
On Thursday, aides said, Biden will harken back to his call during his inaugural address, just two weeks after the insurrection, for leaders to speak the truth about the attack and what motivated it — even as some GOP lawmakers and the the public deny the events of that day.
“There is truth and there are lies,” Biden said at the time. “Lies told for power and for profit. And each of us has a duty and responsibility, as citizens, as Americans, and especially as leaders — leaders who have pledged to honor our Constitution and protect our nation — to defend the truth and to defeat the lies.”
House Speaker Nancy Pelosi, too, is marking the anniversary with a high-minded appeal, telling The Associated Press in an interview Wednesday that “democracy won that night,” when Congress returned to the Capitol after the riot and affirmed Biden’s victory.
To honor the anniversary, Pelosi has scheduled a moment of silence in the House, where many members were evacuated and some were trapped as the rioters tried to break in. She will also deliver private remarks to Hill staff who, as she told AP, stayed to “protect our democracy.”
Later the Democratic leaders will hold a moderated discussion with historians Doris Kearns Goodwin and Jon Meacham; and a session featuring testimonials from members who were there that day. While many lawmakers will be absent due to concerns about COVID-19, several of the events will be livestreamed so they can participate. 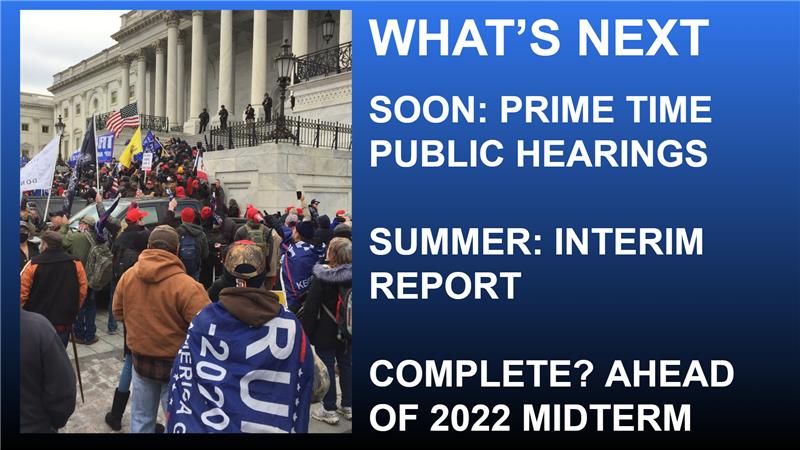 Biden’s sharp message and the Republicans’ distance from it come as lawmakers are adjusting to the new normal on Capitol Hill — the growing tensions that many worry will result in more violence or, someday, a legitimate election being overturned. Democrats and a handful of Republicans feel a desperate urgency to connect to a public in which some have come to believe Trump’s lies that the election was stolen from him and that the attack wasn’t violent at all.
A new poll from The Associated Press-NORC Center for Public Affairs Research showed that 3 in 10 Republicans say the attack was not violent, and about another 3 in 10 say it was somewhat violent. Around two-thirds of Americans described the day as very or extremely violent, including about 9 in 10 Democrats.
As Biden is prepared to direct blame toward the former president, the percentage of Americans who blame Trump for the Jan. 6 riot has grown slightly over the past year, with 57% saying he bears significant responsibility for what took place.
In an AP-NORC poll taken in the days after the attack, 50% said that.
Trump's claims of widespread election fraud were rejected by the courts and refuted by his own Justice Department.
An investigation by the AP found fewer than 475 cases of voter fraud among 25.5 million ballots cast in the six battleground states disputed by Trump, a minuscule number in percentage terms.
___
Associated Press writers Alexandra Jaffe and Farnoush Amiri contributed to this report.
Related Stories

Riverhead mom accused of DWI, crashing with 4-year-old in car

Gunman on the loose after shooting victim in chest in Yonkers