Days after limits on police chases are reversed, 2 killed in crash. Why police say pursuits are necessary

By: News 12 Staff
Days after New Jersey’s acting attorney general reversed the limits on police pursuits, two people were killed in Glen Ridge while fleeing from police officers.
The deadly incident started in Montclair, where officers attempted to pull over a vehicle. The driver allegedly did not stop, and speed away on Bloomfield Avenue, and crashed in Glen Ridge. The driver and passenger were killed.
Details of the incident that led to the crash are still not known. But the topic of police chases has become controversial in New Jersey because of the risks these types of situations carry.
Acting Attorney General Matt Platkin says that the Montclair officers "…activated lights on their marked patrol vehicles in an attempt to stop the vehicle…The officers were in the process of attempting to stop a vehicle in connection with a criminal investigation."
RELATED: Attorney general: 2 dead in Glen Ridge crash following police pursuit
RELATED: Millions of dollars in technology, policy reversal to help police fight growing number of vehicle thefts
In 2021, police officers were barred from pursuing vehicles unless it was for a serious crime such as a homicide or other first-degree crime.
“Police officers were no longer allowed to pursue for burglary, weapon possession and auto theft,” says retired Hoboken Police Chief Ken Ferrante.
The New Jersey attorney general's office has provided News 12 New Jersey with a copy of the use of force policy, which highlights several guidelines officers must obey before engaging in pursuit. A link to those guidelines can be found HERE.
Ferrante says that barring officers from giving chase had dire consequences. Carjackings went up and car thefts soared. There were 14,320 car thefts in New Jersey last year.
“It was known in the criminal community police officers are not able to pursue right now,” Ferrante says. "We had some instances where children were accidentally abducted, where animals were taken."
To combat the rise in crime, Platkin reinstated the rules to allow police officers to chase vehicles. And almost two weeks later, there was a deadly crash.
But the pursuit policy is one that police chiefs all around the state requested after they felt it kept officers from being able to do their jobs.
"There are some crimes of homicide, shootings, sexual assaults, unfortunately carjackings, abductions - the pursuits have to continue,” says Ferrante.
The names of the people killed in the Glen Ridge crash have not yet been released. 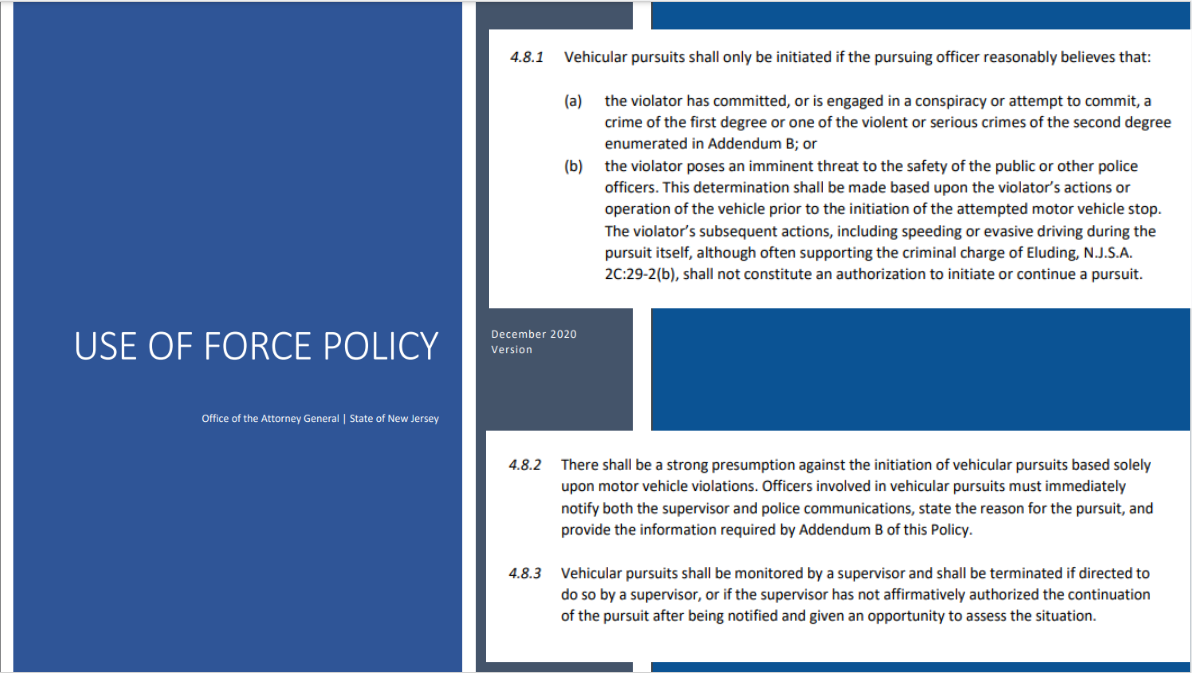 Man who killed officer back in jail after domestic assault accusation