By: News 12 Staff
More than $60 million in federal grant money virtually disappeared from the Restaurant Revitalization Fund nationwide between June and August, a Team 12 Investigation found.
The $28.6 billion federal grant program, funded by taxpayers, is part of President Joe Biden’s American Rescue Plan. The program is meant to help businesses recovering from pandemic losses whose income largely relies on food service: bars, restaurants, inns.
The money from the fund, coined the RRF, is different from the PPP program. RRF money is issued as grants, rather than loans to be paid back.
We asked United States Small Business Administration New York District Director Beth Goldberg about where the money could have gone.

“Do you have any idea where that money went?”
“I do not.”

Team 12 Investigates asked if the disappearing funds were possibly the result of an internal audit. Sources tell News 12 that the SBA had commissioned auditors to look over the grant awardees after the money had been allocated, to make sure the businesses involved were legitimate.
At that point in our interview, our conversation was cut by an SBA communications official.
The issue persists on a national scale. In neighboring New Jersey and Connecticut, we counted almost $1.5 million missing within the same time frame.
News 12 met with two businesses who never received RRF grant money, but for different reasons.
Lorraine Soto, who owns Brava Cafe in the Bronx, had all of her grant funds applied to tax debt -- without her consent.
Another applicant, Rawlston Williams, owns The Food Sermon in Brooklyn. His restaurant in the Brooklyn Navy Yard has been temporarily closed for weeks at a time, because staying shut costs less than being open.
He applied for RRF money, which originally was meant to prioritize businesses owned by minorities, women, veterans, and those with  low-median income. Williams' business fit the profile -- but before he could see any funds, the SBA says the money ran out. 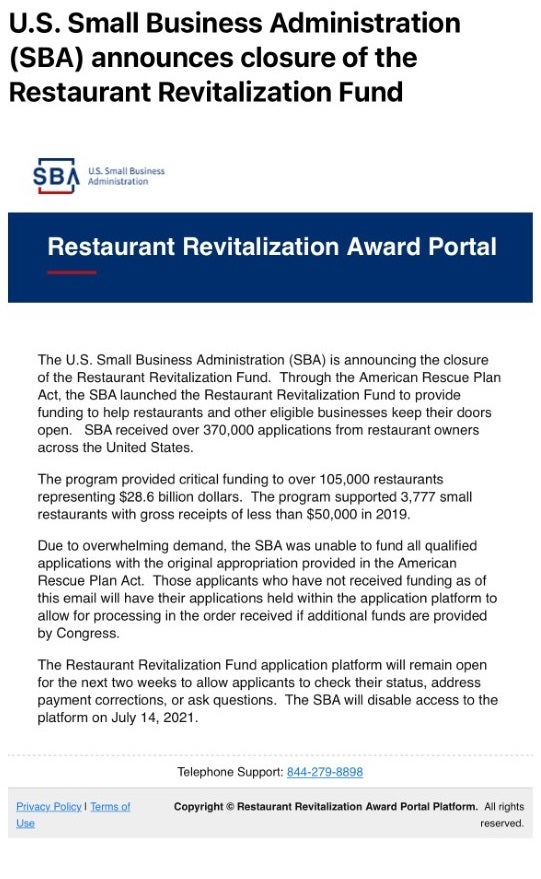 The SBA tells News 12 that the sheer number of nationwide applicants depleted the fund. In the meantime, Team 12 Investigates also learned that a lawsuit waged by two white-owned businesses -- which accused the U.S. government of favoring disadvantaged business owners under the equal opportunity clause of the Constitution -- forced the SBA to revoke already-approved grants from almost 3,000 small businesses across the country. A Texas federal court issued the injunction.
Team 12 Investigates wanted to find out which businesses in the tri-state area were affected by this decision, and so we submitted a freedom of information (FIOA) request to the SBA for a list of mom-and-pop businesses that had their funds revoked.
The SBA would not give us that list, but instead gave us a list of grant awardees in June. We obtained another list in August.
Team 12 Investigates cross-examined the lists -- and noticed that there are 701 businesses that disappeared from the August list, that were present on the June list.
In New York alone, 46 businesses went missing. The total grant money issued to those businesses surpasses $7 million.

The SBA says that money went back to the fund, but their data shows none has been redistributed.
Team 12 Investigates dug through all locations in New York state that disappeared from the June list. Using satellite imagery, we found that almost a third of them appear to be private homes.
We tried calling many of the ‘ghost businesses.’ Many we could not get in touch with, some said they never applied for the money, and others said they never received anything.
We visited another -- which was closed. That business never answered our calls or messages.
Congress introduced legislation in June to replenish the fund and pay the businesses who never received the money in the first place.
Senate majority leader Chuck Schumer told News 12, “We're trying to get that done. We need bipartisan support.”
The new legislation hasn’t been brought to the floor for a vote. Right now, the bill has 222 co-sponsors.
Related Stories

Buyer beware! Here are some of the top scams to look out for in 2022

White House launches website for Americans to request free at-home COVID-19 tests. Here's how to get one.

Tired of getting robocalls? These tools can help you stop the unwanted calls.

Springdale Florist and Greenhouses still blooming after 100 years in business

The New Normal: Everything to know about at-home COVID-19 tests available from federal gov't

White House launches website for Americans to request free at-home COVID-19 tests. Here's how to get one.