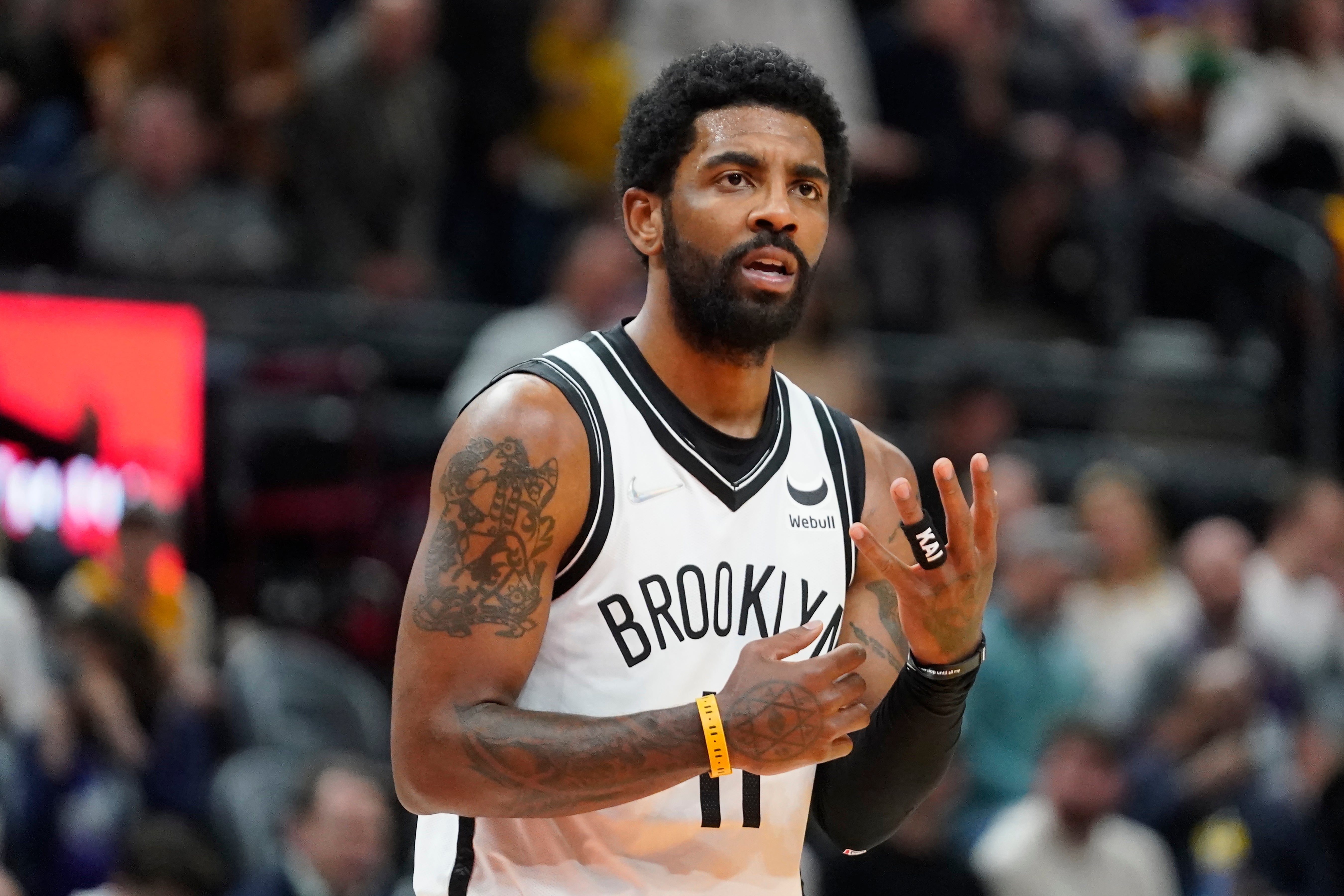 Kyrie Irving has decided to exercise his $36.9 million option for the coming season and will remain under contract with the Brooklyn Nets, two people with knowledge of his decision said Monday.
The people spoke on condition of anonymity to The Associated Press because the Nets had not confirmed the decision publicly.
The Athletic first reported Irving's decision. “Normal people keep the world going, but those who dare to be different lead us into tomorrow. I’ve made my decision to opt in. See you in the fall," the outlet quoted Irving as saying.
On Twitter, Irving posted a separate statement: “I know who I am," was the message there.
For now, that still means a member of the Nets.
The seven-time All-Star averaged 27.4 points and 5.8 assists this past season for the Nets, with whom he has spent the last three seasons. He's about to enter the final season in a four-year, $137 million deal with Brooklyn.
Irving had until Wednesday to inform the Nets of his opt-in decision. It closes one element of the ongoing saga regarding Irving’s future, which has been one of the biggest storylines as the league prepares for the start of free agency on Thursday.
However, it may not be over. Irving could still have his contract extended before free agency begins. Also, the Nets could still trade him - and in fact, teams might be more interested in a deal now that Irving is on an expiring contract.
He appeared in only 29 regular-season games this past season, largely because of his decision to not be vaccinated against COVID-19. That made him ineligible to play in most of Brooklyn’s home games, until getting an exemption to New York City's vaccine mandate in the spring.
Irving said after the Nets were swept by Boston in the first round that he planned on remaining in Brooklyn, even talking about him and Kevin Durant managing the franchise along with general manager Sean Marks and owner Joe Tsai.
But Marks later made clear that discussions about Irving's future would have to involve discussions about being more available to the team, and they could not come to an agreement on a long-term extension that could have paid Irving an additional $185 million over four years.
Irving also took a leave of absence from the team during the 2020-21 season, though the Nets looked on track to reach the NBA Finals before Irving sprained his ankle in Game 4 of the East semifinals against the Milwaukee Bucks, who rallied to win the series in seven games.
The Nets returned this past season thinking title with their core of Irving, Durant and James Harden. It didn’t work out anywhere near as planned. Irving wasn’t with the team for the majority of the season, Harden ended up getting traded to Philadelphia, the Nets needed to survive the play-in tournament just to make the playoffs, and Brooklyn wound up getting swept in the first round by the eventual Eastern Conference champions.
Durant and Irving are close friends who came to the Nets together in July 2019. Durant signed his own extension last summer, but had Irving not remained with the franchise next season, it certainly could have led to Durant pondering his own future in Brooklyn.
But with Irving presumably back, and with Ben Simmons - who didn’t play at all this season and was acquired by the Nets in the Harden trade - set to team up alongside Irving and Durant this coming season, Brooklyn could quickly return to contender status.
Irving could have made this all go away over the weekend, or at least turned the full boil down closer to simmer, when asked by Complex News at the BET Awards if he still wants to play for the Nets. He declined to answer. He wasn’t rude about it, did it with a smile, but didn’t provide so much as a hint.
A tiny one came Monday when the clip was posted to Instagram and Irving was among those to comment.
“When I smile like that, it means there’s more to the story,” Irving wrote Monday, several hours before his opt-in decision was revealed. “I’ll have my time to address things.”
___
Reynolds reported from Miami.
___
More AP NBA: https://apnews.com/hub/NBA and https://twitter.com/AP_Sports
(Copyright 2022 The Associated Press. All rights reserved. This material may not be published, broadcast, rewritten or redistributed without permission.)
6/27/2022 8:19:53 PM (GMT -4:00)
Related Stories

Yankees place RHP Holmes on injured list with back soreness

Football on the mind ahead of Pinstripe Bowl

Mets’ Carrasco likely out up to a month with oblique strain

Yankees place RHP Holmes on injured list with back soreness